On July 27, 1940, Lonnie Smith, a Black dentist in Houston, Texas, tried to vote in that year’s Democratic Party primary elections. County officials refused to give him a ballot. They knew they stood on solid ground—the officials acted according to a 1932 rule of the Texas Democratic Party that only white citizens could vote in its primaries. The Supreme Court had upheld that rule in 1935. Black citizens had no constitutional right to vote in primary elections.

In the Jim Crow South, the “white primary”, as it was known, was the first line of attack—and often the only one needed—to prevent Black Americans from voting. Smith’s attempt to vote was part of a decades-long protest against voter suppression that had made little headway. But three years after that attempt, Thurgood Marshall, chief counsel for the NAACP, took Smith’s case to the Supreme Court, argued for abolishing the white primary—and won. In his later years, Marshall hailed Smith v. Allwright (1944) as his most important victory, moreso even than his most famous case, Brown v. Board of Education of Topeka (1954).

This exhibit examines the Court’s decision in Smith v. Allwright and its place in the history of voting rights and voter suppression. 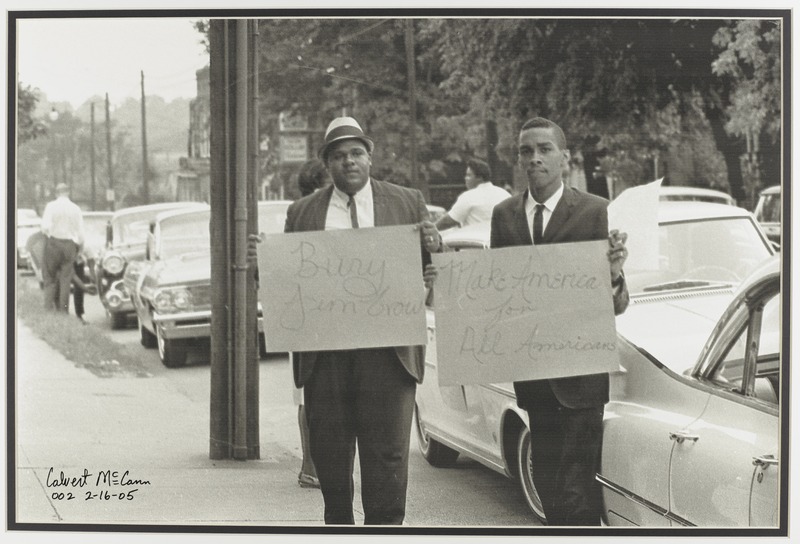 Demonstrators hold signs reading "Bury Jim Crow" and "Make America for all Americans Black Americans". Black Americans challenged Jim Crow laws from the end of Reconstruction until their dismantling in the 1960s.

At the turn of the 20th century, Southern states passed laws excluding nonwhite voters from primary elections. Black activists began challenging the laws almost immediately. In Nixon v. Herndon (1927), Dr. Lawrence Nixon, a Black Democrat, challenged a Texas statute that denied him the right to vote in the party primary. The Supreme Court declared the law unconstitutional. Texas then changed the law to allow Democratic Party executives to ban Black voters. Dr. Nixon sued again. In Nixon v. Condon (1932), the Court declared the amended law unconstitutional. Democratic Party officials then turned to their state convention, where they adopted a rule to exclude Black voters from their primary. This time, in Grovey v. Townsend (1935), the Court upheld the rule. With these three cases, the Supreme Court established that while states could not deny Black citizens the ballot, political parties, as private organizations, could. White primaries were constitutional. In the Jim Crow South, where the Democratic Party controlled politics, Black voters’ exclusion from the primary essentially meant exclusion from the democratic process. 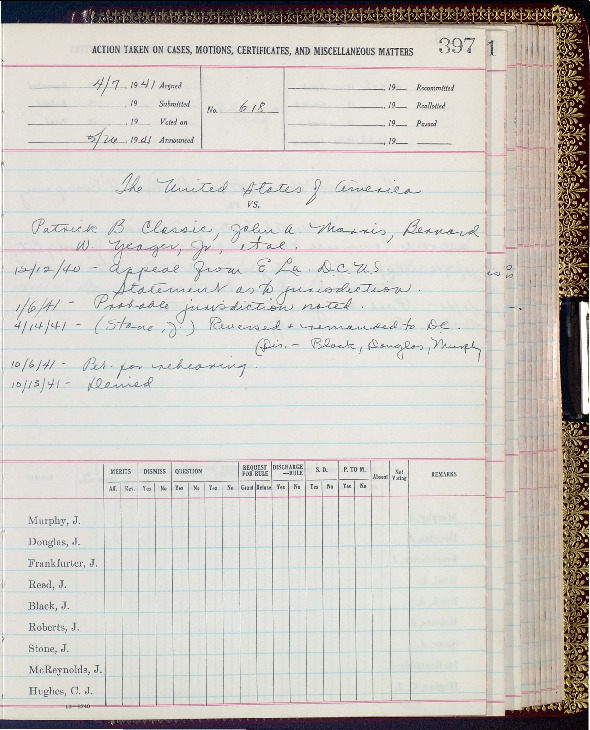 US v. Classic gave activists a new precedent with which to challenge the white primary.

In 1941, civil rights lawyers saw an opening. In a case named United States v. Classic, the Supreme Court ruled that Congress could regulate Democratic Party primaries. The Court also held that citizens had a constitutional right to participate in party primaries, just as they did in general elections. The case had nothing to do with Black voter suppression. Instead, Classic concerned whether fraud committed in a primary by state officials could be prosecuted under federal criminal law. The Court held that yes, the role of the primary in a state’s election system meant that the state had delegated some of its election functions to the Democratic Party. State action of that kind came under federal jurisdiction. For the first time, the Supreme Court ruled that party primaries were subject to the Constitution—if, that is, the primaries performed election functions that actually belonged to the state. 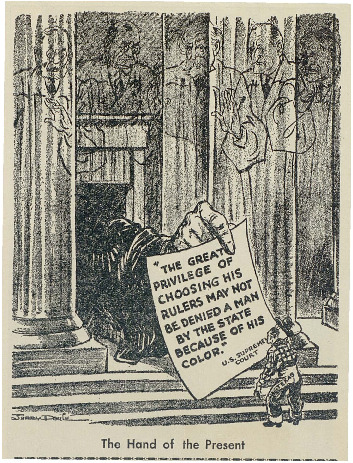 Newspapers across the country, including in the South, quoted the sentence above from Justice Reed's opinion in Allwright.

After Classic, Lonnie Smith quickly filed suit in federal court against county election official S. E. Allwright for refusing to let him vote in the 1940 Democratic primary. A member of the local NAACP chapter, Smith was represented by Thurgood Marshall and local counsel W. J. Burnham. The two attorneys argued that, based on Classic, the white primary was unconstitutional.

In 1944, the Supreme Court decided 8-1 in favor of Smith and against Texas’s white primary. In his majority opinion for Smith v. Allwright, Justice Stanley Forman Reed, a Kentucky native, wrote that the key to the case was whether Black Texans were excluded from the primary due to state action or due to private action (i.e., Democratic Party). Based on Classic, he concluded that the Texas Democratic Party’s primary was an integral part of the state’s election process. Therefore, when the party denied Black citizens the right to vote, the state denied them as well. And that was unconstitutional. 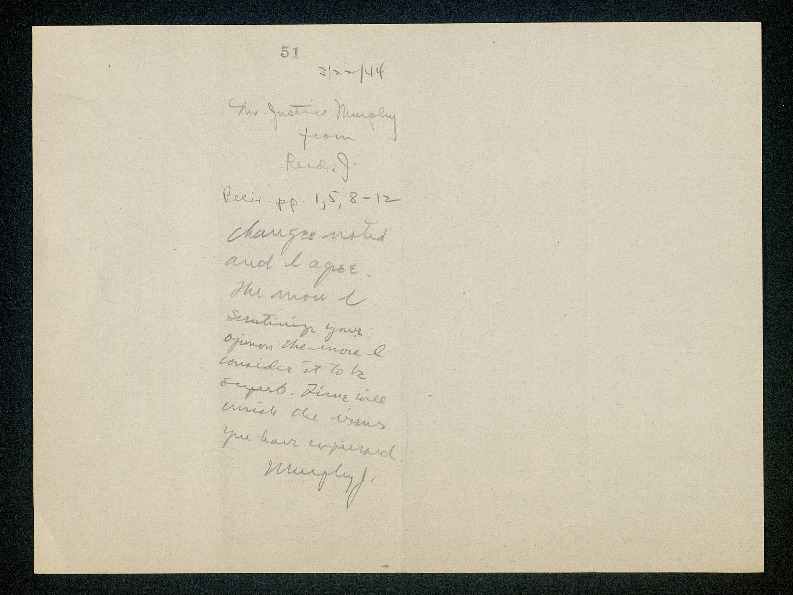 Justice Frank Murphy writes to Reed that "time will enrich the views" Reed expressed in Allwright.

The lopsided majority in the decision suggests that the Court saw Allwright as a straightforward case. But some thorny issues were present. Chief Justice Harlan Fiske Stone initially assigned the majority opinion to Justice Felix Frankfurter for writing. But Justice Robert Jackson urged another choice: “…the Court’s decision, bound to arouse bitter resentment, will be much less apt to stir ugly reactions if the news that the white primary is dead, is broke to it, if possible, by a Southerner who has been a Democrat and is not a member of one of the minorities which stir prejudices kindred to those against the Negro”1. Stone re-assigned the opinion from Frankfurter, a Jewish Northerner, to Reed, a Kentucky native and longtime Democrat. 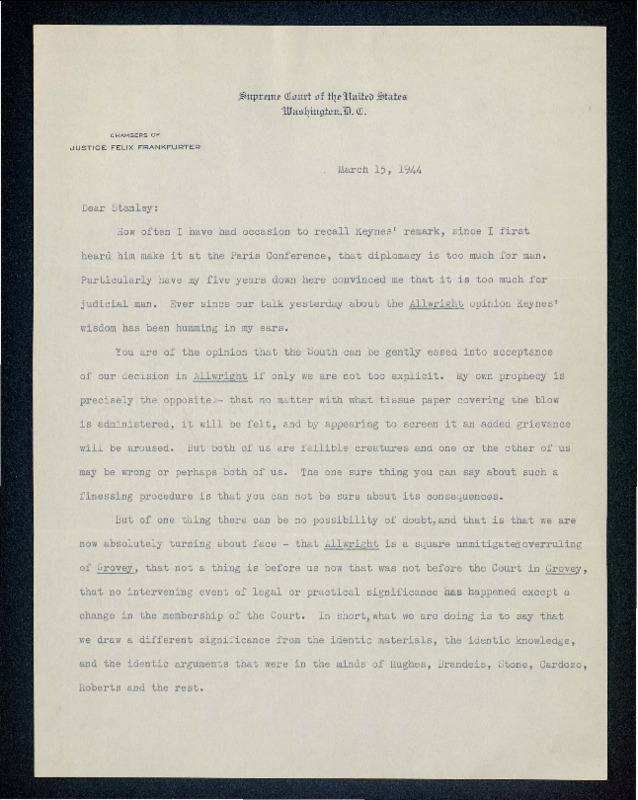 Justice Frankfurter concurred with Reed's Allwright opinion rather than join it because he felt Reed tread too lightly around white Southern sensitivities.

The justices understood the significance of their decision in Allwright. In 1935, the Court had ruled in Grovey that political parties were private groups that could exclude Black voters from their primaries. Now, a mere nine years later, the Court held in Allwright that, in fact, white primaries were unconstitutional. In this letter, Justice Felix Frankfurter urged Reed to acknowledge the Court’s change in position directly, rather than “finessing” it as he felt Reed tried to do in his draft opinion. “If, as you indicated, the South will not, in any event, yield to the practical consequences of our decision," Frankfurter wrote, "if means will be found to keep the Negroes from voting – it is all the more incumbent on us to avoid all covertness and to speak with complete candor.”

After his Supreme Court win, Lonnie Smith voted in the 1944 Democratic primary in Harris County, Texas.

Black voters hailed Allwright as the end of the white primary. Lonnie Smith called the decision the most significant for Black Americans since Dred Scott2. More than a decade later, Thurgood Marshall wrote that the decision “leveled the great barrier to Negro voting in the South”3.

Galvanized by Allwright, Black Southerners registered to vote in cities and towns—those, that is, who could pass literacy tests and pay poll taxes. An estimated 200,000 Black Southerners voted in the 1944 elections, after Allwright was decided. By 1948, the numbers climbed to between 700,000 and 800,0004. Backed by Allwright, Black Southerners braved violence to mobilize and vote. In South Carolina, for example, after the federal district court confirmed in Rice v. Elmore (1947) that, per Allwright, the state Democratic Party could not ban Black voters, the Ku Klux Klan drove a motorcade around the state capitol and burned crosses in front of Black churches. Despite the risk, a record 35,000 Black South Carolinians cast their votes in the following year's Democratic primary.5 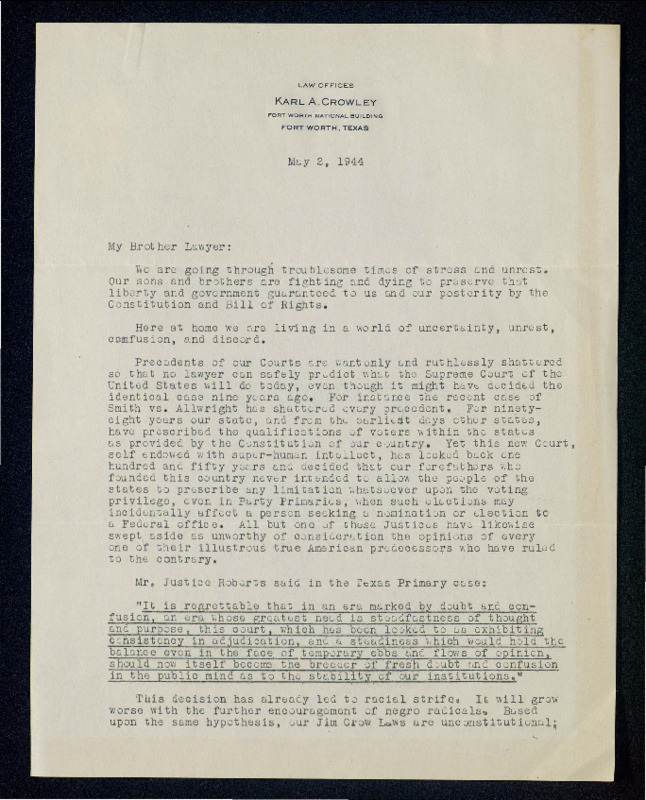 Texas attorney Karl Crowley saw the end of the white primary as the first step to ending Jim Crow.

White supremacists resisted the Court’s ruling. Abolishing the white primary brought Black citizens too close to equality. In this letter, Karl Crowley, a former Texas gubernatorial candidate, wrote to the Fort Worth bar that Allwright’s reasoning could encourage “Negro radicals” and lead the Supreme Court to declare Jim Crow unconstitutional. “Our own constitutional poll tax,” he wrote, “is certain to be scrapped after all these years.”

With so much at stake, Southern states tried to circumvent Allwright by deregulating political parties altogether. That way, the primaries were explicitly private activity with no formal connection to the state. South Carolina, for example, removed 150 statutes from its books to that end. The NAACP fought these attempts and won in lower courts, but the white primary persisted until 1953, when the Supreme Court held in Terry v. Adams that white-only “pre-primaries” held in Fort Bend County, Texas, were unconstitutional. 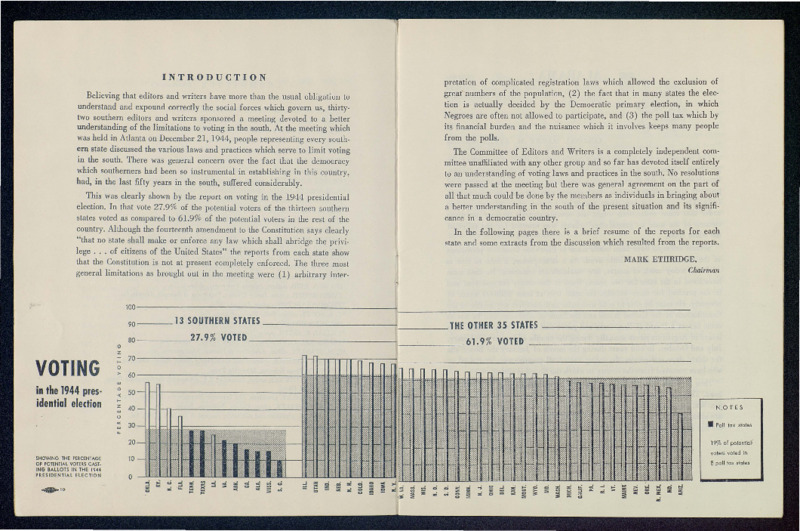 The Committee of Editors & Writers of the South reported that voters living in states with poll taxes cast fewer ballots.

Whether, however, Allwright had as far-reaching consequences as Smith, Marshall, or Crowley claimed is an open question. While the white primary slowly died in federal courts, white Southerners leaned more heavily than ever on other voter suppression tactics, particularly literacy tests and poll taxes. An analysis of ballots cast in the 1944 presidential election—after Allwright—revealed that voting was consistently weaker in states with poll taxes. Violence reinforced the formal obstacles that Black voters faced. In 1946, during his United States Senate re-election campaign, Mississippi Senator Theodore Bilbo said that the best way to keep a Black voter from a primary was to "visit him the night before."6 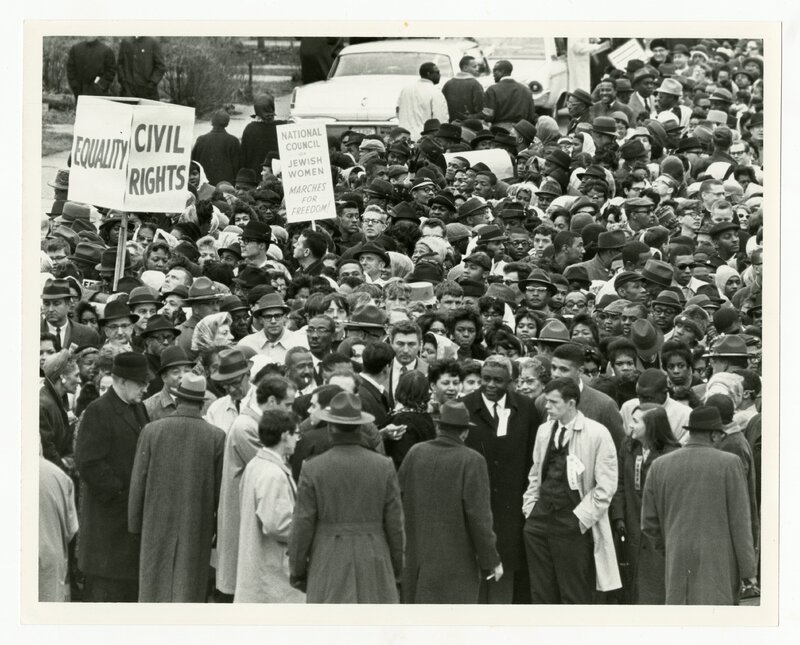 It would take another twenty years of protests and challenges before Black Americans won legal protections for their right to vote. In 1964, the Twenty-Fourth Amendment abolished poll taxes in federal elections, and the Supreme Court's 1966 decision in Harper v. Virginia State Board of Elections abolished them in state elections. The Civil Rights Act of 1964 also required that states apply voter qualifications equally to all eligible voters, regardless of race or ethnicity. 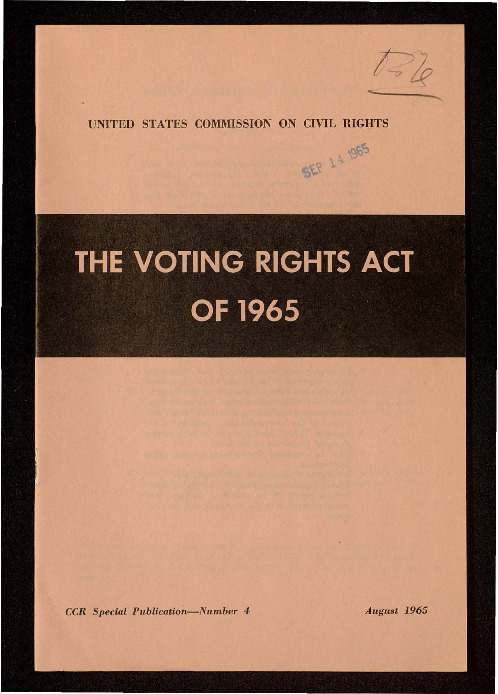 The Voting Rights Act of 1965 continues to be a flashpoint between states and the federal government.

But it was the Voting Rights Act (VRA) that represented the most sweeping protections for Black voters, as well for all racial and ethnic minorities. The VRA continues to be contested today. Passed by Congress in 1965, the law, among other reforms, outlawed literacy tests, “moral character” qualifications, and any other voting law that discriminated against minorities, whether by intent, or later, by result. The Act also required that federal authorities approve any election law changes before they went into effect in Texas, South Carolina, and other places that had a history of voting discrimination.

Almost immediately, states challenged the VRA’s intrusion, from their perspective, into their domain. And the federal courts remain at the center of voting disputes today: In 2013, the Supreme Court held major parts of the VRA unconstitutional, freeing states and localities to pass voting laws as they see fit, including facially neutral voter qualification laws that disproportionately affect poor and minority voters. 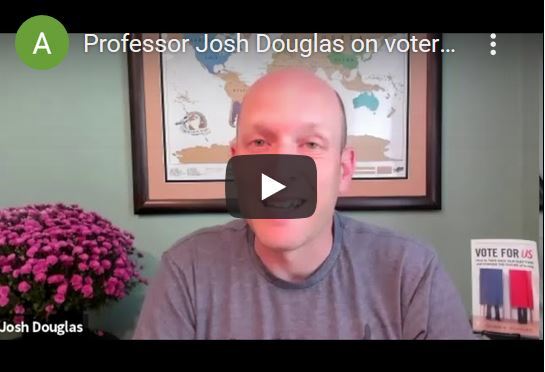 Nearly one hundred years after Dr. Nixon challenged the white primary in Texas, voting rights remain contested in his homestate, as they do across the country. In this video, University of Kentucky Professor Josh Douglas describes voter suppression tactics employed during the 2020 election season, which takes place amidst the Covid-19 global pandemic. An elections expert in the UK Rosenberg College of Law, Douglas describes how more than 250 federal lawsuits have challenged state laws that make it more difficult to vote during pandemic, particularly for Black Americans and other racial minorities. Who gets to vote, whose votes count, and who decides the rules—these questions continue to be contested in elections across the United States. And federal courts are at the center of these fights.